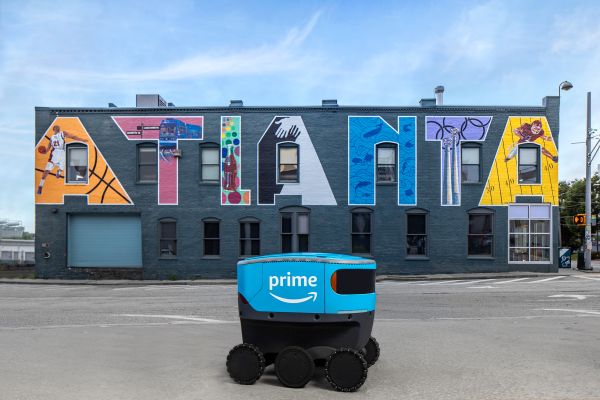 While robotaxis and autonomous trucking grab the headlines, Amazon continues its quiet rollout of its autonomous delivery service, Amazon Scout.

According to a blog post, Scout will soon launch in Atlanta, Georgia, and Franklin, Tennessee. Amazon launched the service in January 2019 in Snohomish County, Washington, and expanded it to Irvine, California, in August.

Created by Amazon at its research and development lab in Seattle, the Scout robot is the size of a small cooler and moves at a walking pace. According to Amazon, the robot can navigate around pets, pedestrians, and other objects in its path.

A “small number” of Amazon Scout devices will be deployed in each city, delivering Monday through Friday during daylight hours. (Amazon launched in Washington with six bots.)

Customers in both areas will order just as they normally would, and their Amazon packages will be delivered either by a human or by Amazon Scout.

The devices will autonomously follow their delivery route, and initially be accompanied by an “Amazon Scout Ambassador” — its version of a safety operator.

The new cities will allow Scout to be tested in novel geographies and climates. So far, Amazon has avoided the crowded sidewalks of large cities such as New York or San Francisco. Atlanta is its biggest city to date; it’ll be interesting to see where in Atlanta the service will be deployed.