ORLANDO, Fla. – The freight cycle has bottomed and trucking conditions should improve later this year and into 2021 as freight demand and capacity come into balance.

That was the upbeat outlook from Tim Denoyer, vice-president and senior analyst with ACT Research, when speaking at the Truckload Carriers Association’s annual convention March 2.

He noted the Class 8 market and capacity are “very much interlinked” and that the industry is in a rebalancing mode after adding too much capacity over the last couple years. 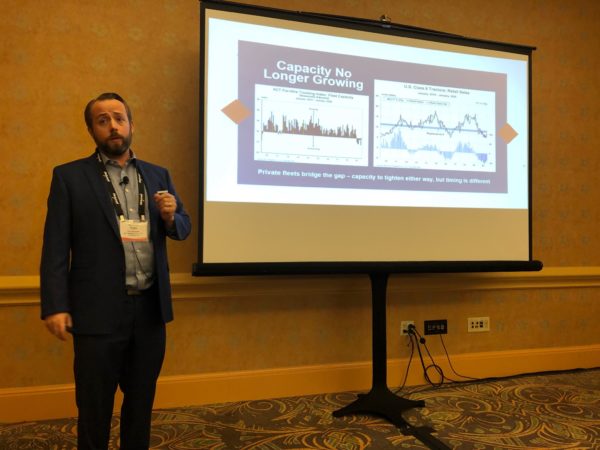 “Freight demand creates Class 8 tractor demand and tractor demand then translates into capacity,” Denoyer explained. “Capacity is the main driver of freight rates over the long-term.”

The market is currently transitioning from an oversupply of capacity to an early cycle balance recovery, according to Denoyer. “Things are about to start getting better assuming the economy holds up,” he added.

Class 8 tractor orders were down about 67% in 2019 compared to 2018, one of the industry’s historically best for demand. But there’s still a healthy backlog of about 80,000 units, so production this year will not be down by two thirds. The key, said Denoyer, is that Class 8 capacity is no longer growing and is actually contracting within the for-hire segment. Private fleets, however, continue to add capacity quite aggressively.

“We are now forecasting Class 8 demand below replacement demand, which is going to start taking capacity out of the market, which is the rebalancing we need right now,” Denoyer said.

In 2018, the industry enjoyed strong conditions because capacity contracted while freight volumes increased. The exact opposite happened in 2019, which swung pricing in the favor of shippers. Denoyer said that pricing pendulum is soon to swing back in the favor of carriers.

“Even if nothing happens with freight, the lower truck production rates we have right now will start pushing…back on the side of the coin that favors carriers,” he said, pointing to a chart that supported his theory.

But there are regulatory issues to consider. The new drug and alcohol clearinghouse could tighten capacity slightly, but proposed reforms to hours-of-service and split sleeper berth provisions would potentially add capacity.

“I’d be very cautious about the sleeper berth provision in the hours-of-service regulations,” Denoyer warned. “I get it, it makes perfect business sense, but it adds capacity so inevitably it would be a bad thing for pricing. I’m not sure how hard I’d lobby for something that’s going to hurt my margins.”

He also warned of a new EPA proposal that would look to reduce NOx emissions another 90% by 2027.

“It’s going to add a lot of cost” if the proposed regulation passes, he said, predicting the largest pre-buy ever seen by the industry would occur in 2024-2025.

Denoyer said a very good case could be made that the freight recession is already over.

“These things tend not to last more than two years unless we’re in an economic recession,” he said, adding the freight recession has lasted four to six months. “Economic recession aside, I think there’s a very good case for a bounce-back later this year.”

But there are still risks on the horizon, including the impact Boeing’s issues could have on manufacturing output and the effect of the coronavirus. Trade disputes are also a lingering concern.

“Imports from China have slowed to almost a halt,” Denoyer said. “When freight is not coming in, it’s going to slow down the market for the next couple months.”

Still, Denoyer remains optimistic and thinks a V-shaped freight recovery is quite possible once these issues are overcome.

Looking to pricing, Denoyer thinks spot market prices will get a little worse before improving, but will finish the year in positive territory. Contract rates are nearing the lows and should turn positive late this year or in 2021.