ORLANDO, Fla. – A panel of second- and third-generation trucking industry leaders took part in a panel at the Truckload Carriers Association annual convention this week, diving into a wide-reaching discussion about leadership and industry trends.

Becoming a leader in a second- or third-generation trucking business is arguably more challenging than it is as an outsider, panelists agreed. Family members often have to work harder to earn the trust of employees. There’s also “second generation guilt,” according to Wilson. “It took time to feel I had added enough value to dissipate that. I was working harder than everyone in the room to get rid of that.”

Wilson said he became a leader when his company bought a distressed carrier, and he was tasked with getting it back on track.

Coca agreed it can be daunting to lead a family business, adding “You have to work a little harder to show you’re not just in this because it’s an easy out. I was walking in at 6:45 a.m. when everyone else was showing up at 7:38. Through that, I think I gained a lot of credibility with the staff that was there.”

The same holds true of the next generation, added Smerchek, who now has kids and a nephew working for the company.

“They have a bar that’s probably higher than the rest,” she said, adding other employees appreciate seeing the kids chipping in and tackling unglamorous jobs like filling vending machines and painting.

“Be passionately curious in every single thing you do,” advised Wilson, when asked what advice he’d pass on to future leaders. “Don’t do things because you’re told to do them. Always understand what is happening, why it’s happening and if you do, you will question should it be done this way?”

Coca’s advice was to “Be a sponge. Listen to all those people who came before you. Pay attention to what people are saying.”

Coca turned down the opportunity to become president of Diamond Transportation in 2009, telling family he wasn’t yet ready. A president was hired to mentor Coca and prepare him for the role, something he said he benefited from immensely.

Smercheck said she’s currently in the process of assembling a board of advisors to mentor her. “If I had that 15 years ago, I would be in a much better space today,” she acknowledged. “Having a family mentor, you can only go so far.”

She also advised attendees not to try to master everything. “Look at your weaknesses and hire the people who have those as strengths,” she suggested. “You can hire those skills.”

For Smercheck, it’s important to create an environment that allows people to make mistakes, but to set a threshold as to which types of mistakes are tolerable. One of the biggest challenges for her is to hold people accountable.

“My leadership is demonstrated daily by holding team members accountable,” she said. “Nobody likes to be that person who holds that person accountable, but your team players don’t want the person who’s not pulling their own weight on the team. Respect is gained from making the unpopular decisions – get the elephant out of the room.”

For Wilson, creating greater transparency is an ongoing challenge.

“It takes a genuine effort to create transparency,” he said.

Coca described his leadership style as “Pretty laid back. I look at my job as one where I want to hire good people and let them succeed and fail. If I don’t trust them or am looking over their shoulders every step of the way, I might as well be doing the job.” 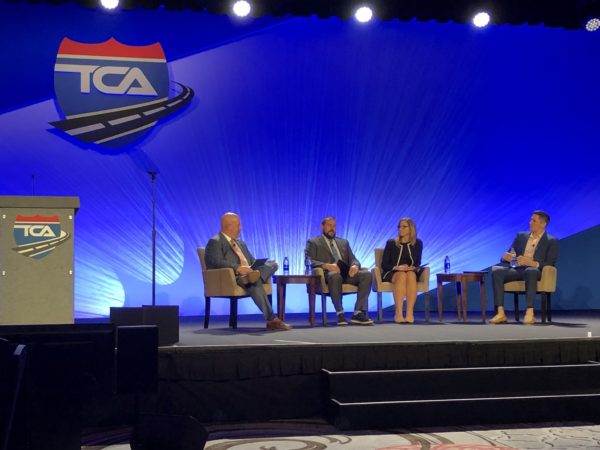 One of the biggest challenges facing today’s trucking industry leaders is keeping up with advancing technologies and managing data.

“We analyze almost everything,” said Wilson. “We had a one-person pricing department that has since become a data analysis department focused on creating reports and KPIs and metrics for every department within the organization. Where we have fallen short is, we have not done a good job at training people to really know how to use that data.”

Wilson said he is often copied in on reports intended for other managers and will identify errors that went unrecognized by the person the report was intended for.

Smercheck said her pet peeve is when the company doesn’t fully utilize the technology it has invested in. She encouraged fleets to invest only in the technologies that will deliver a return on investment in their own operations and to avoid long-term contracts with vendors.

“We are sometimes asked to sign a 60-month contract,” she said, adding she prefers to pay more up-front in exchange for a shorter-term contract. “Even then, that technology is at risk of not being valid when the contract is over. Ensure you’re doing an analysis based on your business model and not because it got accolades from another fleet that you admire.”

Coca said Diamond, an all owner-operator fleet, is still in a growth pattern, but acknowledged conditions are getting tougher.

“In trucking, we’re our own worst enemies,” he said. “We overreact in a very short period of time to just about everything that’s out there; 2018 was a wonderful year for trucking and most of 2019 was – for us, anyways. Now things are tightening up and we’re going through a lot of new RFPs and I just know trucking is going to kill itself and cut rates. When things are good, there’s a certain segment out there that are gouging rates. I try to have a relationship with customers where I bring that up. I’m not going to cut my rates this cycle, I can’t afford to – our owner-operators would go somewhere else. But I’m going to provide that great service…it’s tough because you have to rely on every other trucking company holding their head high.”

Wilson said his company doesn’t chase spot market freight, which has helped it weather current headwinds. He said there’s been some pressure on rates, but more than 90% of its freight is contract freight.

Another challenge is finding quality drivers. At Veriha Trucking, drivers are developed through an apprenticeship program.

“The quality of driver we’re able to create from training from the ground up someone who doesn’t have a CDL has a tremendous impact on the organization,” said Smerchek. “They don’t have negative connotations about things.”

They’re more willing to accept things such as in-cab cameras, she said, because they don’t come to the company with pre-conceived ideas about how things should work.

Nashville tornado spares TA in a near miss

What Will Issues Like Electrification, Consolidation Mean for Parts and Service?...