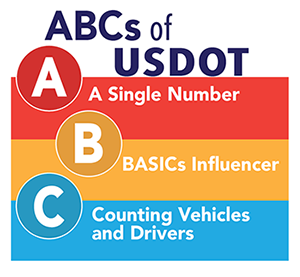 A carrier’s USDOT number is used by the Federal Motor Carrier Safety Administration (FMCSA) to track safety performance. All legal entities involved in interstate commerce using commercial motor vehicles are required to have one.

Nearly forty states mandate that their intrastate carriers have a USDOT number. Regardless of the state of operation, any intrastate carrier that’s required to have a Hazardous Material Safety Permit (HMSP) must also register with the FMCSA. With over 1.5 million registered carriers in the U.S., questions are bound to exist. The following covers the most commonly asked questions regarding the fundamentals — or ABCs — of FMCSA registration.

A = A Single Number

The unique identifier policy is also the reason that USDOT numbers are not transferable. When, as a result of a sale or merger, a new entity is created (as identified by a new FEIN), the new entity will also need a new USDOT number to continue transportation operations.

Five of the seven Compliance, Safety, Accountability (CSA) BASICs rely solely on the number of relevant inspections within the BASIC to determine a carrier’s scoring and resulting peer group ranking. However, two of the BASICs, Unsafe Driving and Crash Indicator, also take into consideration how many “at bats” the carrier has.

These two BASICs have a utilization factor that incorporates the number of power units and the vehicle miles traveled into the methodology formulas. It stands to reason that if all things are equal, a carrier that has twice as many powered vehicles and travels twice as many miles in a year will have twice the number of accidents and unsafe driving violations.

Because of this factor, carriers that are growing should/must update their MCS-150 more often than every other year so they can be properly compared with their peers.

When carriers are reducing their size, based on vehicle counts, it’s as important to provide updates more often than biennially. This is because the Unified Carrier Registration (UCR) plan uses a carrier’s MCS-150 vehicle count as the starting point to determine the fee bracket. The more vehicles reported, the greater the likelihood of being in a higher fee bracket. Changing from one bracket to the next can mean the difference of hundreds, thousands, or tens of thousands of dollars that the carrier pays.

As stated, getting the counts right can make a difference in a carrier’s CSA peer group and the fee bracket for UCR. But what vehicles and drivers should be counted?

At first glance, the driver count seems the more difficult of the two to calculate. The FMCSA wants the drivers broken out by the number that operate strictly intrastate and the number that operate interstate. The agency then wants those totals broken down into drivers that operate exclusively within a 100 air-mile radius and drivers that work outside of the 100 air-mile radius. Those four totals need to add up to the total number of drivers.

From the total number of drivers, a separate count is needed for the number of CDL drivers. At this point, it seems almost as bad as doing your own taxes on the long form. It needn’t be.

The driver counts are based on an average workday. The FMCSA is not expecting carriers to break out the spreadsheets and pivot tables. They are looking for an educated overview of the operation. The data is used more from a census point of view rather than from an enforcement stance. Your driver count does not enter into the calculation of any safety scores.

The exercise is completed more easily when worked backwards. Start with the number of drivers that operate CMVs on any given (average) day. Break that count into drivers that are likely to stay within 100 air-miles (not necessarily qualifying for the short-haul exception). The outside the air-mile number is then the difference from the total. Break those numbers into the average that run intrastate vs interstate. The inter- vs. intrastate breakdown is most important if taking advantage of the often more permissive intrastate rules.

Counting vehicles seems like it would be easier than drivers, and it might be if the count also used the “on an average workday” instructions. The MCS-150 instructions are a bit confusing regarding which vehicles to count. Thankfully, MCSA-1 will eventually replace the MCS-150. The MCSA-1 is much clearer and provides exactly what the FMCSA is looking for.

The vehicle count is based on number of vehicles one the day the form is submitted that have a weight of 10,001 pounds or more (rated, actual, or used in combination – again rated or actual) and are operating under the carrier’s USDOT number. For the purpose of the operation, count vehicles that are registered to the carrier or have been leased for more than 30 days in the last year. On the MCS-150 there is no distinction between inter- and intrastate vehicles. If the vehicle meets the description above, it should be counted.

The vehicle types are relatively straight forward. But one question that is often asked in this area is how to count pickup style trucks. Pickups are considered straight trucks.

The old adage is if all else fails, read the directions. That’s good advice when registering or updating your registration with the FMCSA. On paper, the MCS-150 is three pages, but the form comes with eight pages of instructions with examples. For the most part, the instructions are written in plain English. As with taxes, filers have two additional options: filing electronically or hiring a professional. The electronic versions have help available through the process. Since professionals are familiar with the process, there should be no guessing or headaches for the filer.